Kreuth, July 27 — Provided by Simona Diale, IHP — The 2019 National Reining Horse Association (NRHA) European Derby opened the doors to competition today at the Ostbbayernhalle in Kreuth. The ninth edition of the event, open to 5-6-7-8-year-old horses enrolled in the NRHA Nomination Program, welcomed the first section of the €49.000-added Non Pro Derby qualifier counting 100 entries as well as the first of the full-slate of NRHA ancillary classes. 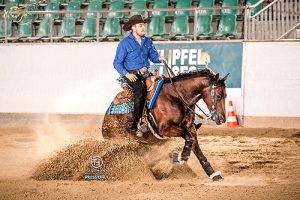 Taking the lead in the €20.000-added Level (L)4 and €15.000-added L3 divisions with a 217.5 — the high score of the day — was Italian Edoardo Bernardelli riding his own Whiz Wild West. The 6-year-old gelding by Spark N Whiz out of West Coast Oak was bred and nominated by Mattia Camisi. The talented bay, who boasts over $167,000 Lifetime Earnings (LTE), clinched the 2017 NRHA European Futurity L3 Open Championship with NRHA Professional Guglielmo Fontana in the saddle and the 2019 Italian Reining Horse Association (IRHA) L3 Non Pro Derby Championship with Bernardelli. 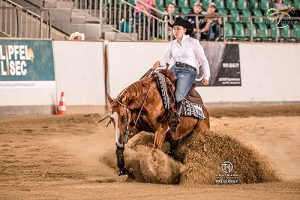 In a field of 16, Celine Beisel of Germany took home first place honors in the Rookie Level 1 riding her PM Jackson Olena who she purchased six months ago. For the duo, this is the second show together and they will be showing in the second section of the Non Pro Derby. Second place in both the Rookie Level 1 and Level 2 was for Bernice Engel, also from Germany, riding her own Spookslimitededition. 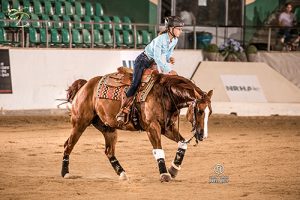 Taking first place in the Rookie Level 2 was Sophia Staub, proud to be able to show her mother’s [Sabine Schmid] Gunslinger Lil Step. “My mom showed this horse until last year and, since January, I took over the reins,” said the 13-year-old rider from Austria. “I really like him; he’s so good minded and is a lot of fun to show.” The pair will be showing again this week in the NRHA Youth 13 & Under.