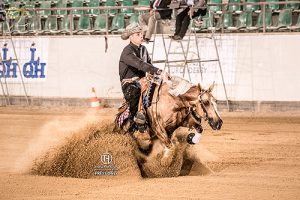 Kreuth, August 2 — Provided by Simona Diale —Opening the day in Kreuth was the NRHA Midsummer Futurity open to 4-year-old horses. Taking the Championship in both the €5.000-added Level (L)4 and €2.500-added L3 was French professional Arnaud Girinon riding Valerie Fontaine’s BHB Wimpy Choco Gun, a mare by BHB Mr Wimpys Royal out of BHB Kateberry Stargun. “I’ve had this mare in training since she was 2 and I’m pretty satisfied with my run today,” said Girinon. “I had no bobbles and she had nice circles and stops, particularly on the left lead. In two weeks, we are going to the Austrian Futurity and then Belgian Futurity at the end of September. Sadly, she is not enrolled in the NRHA Nomination Program — which is also one of the reasons why I showed her here today — and future plans may also include showing her in Cremona, Italy, at the end of the year.” 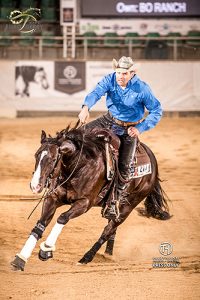 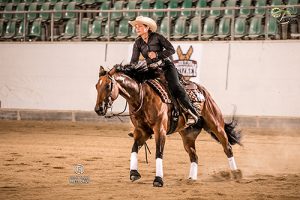 With a 211 score, Austrian Tina Kuenstner-Mantle rode JP Vickie Barcelona (Hang Ten Surprize x Fancy Bingo Star) owned by Jacpoint Quarter Horses to the €2.100-added L4 Non Pro Championship. “We bred this mare and her dam, Fancy Bingo Star, is in California,” said the multiple past NRHA Non Pro Champion. “[NRHA Professional] Martin Muehlstaetter started her as a 2-year-old and I have been riding her since the middle of her 3-year-old year. She was nice for me today, even though from the fast to the slow circle she fell out of lead. The score could have been a lot higher, but she was nice to show as she is a really big stopper. I’m not sure whether I will be competing with her again this season since I have a futurity horse in the U.S. that I would really like to bring to the NRHA Futurity.” 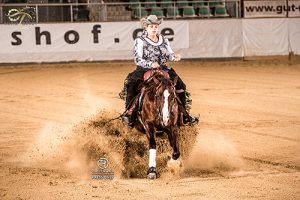