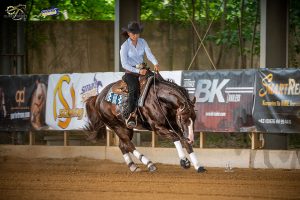 Riding to the top spot with a 217.5 score in both the $19,200- added* Level (L)4 and the $14,400-added* L3— counting 23 and 30 entries respectively—was Italian Francesca Ferrarol riding Wimpy Margarita (NRHA Twelve Million Dollar Sire Wimpys Little Step x Custom Margarita x Custom Crome), a stallion nominated by her father Maurizio Ferrarol and bred by Judy Box. The duo had captured the Levels 3, 2, and 1 Championships in the last edition of the NRHA European Derby (in 2019)

“I’m really happy even though I must admit that last night I was a little worried, especially after the long break,” said Ferrarol.  “Today he was super and I already felt he was good in the warm up pen. Once again I have to stress the fact that he has a huge heart and always gives me everything. I started riding him in 2018—until then he was ‘the cool horse we had at home!’ My dad finally decided to let me ride him and I’m truly blessed.” The young rider was quick to give her trainer, Italian professional past NRHA Intermediate Open World Champion Guglielmo Fontana, credit for the work done with her and her horse. “Guglielmo is amazing,” she added. “He’s always reassuring, even in the most difficult moments, and that’s exceptional.” 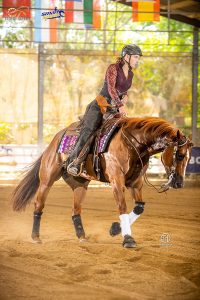 Tying to win the $9,600-added* L2 and the $4,800-added* L1 Non Pro division—counting 23 and 27 entries respectively—were Sara Karasova of the Czech Republic and Nikolai Stiller of Germany.

Karasova rode her KH Yankee Step (Rowdy Yankee x Step A Little Closer x Wimpys Little Step), a 6-year-old gelding nominated by Franz Lechner, to a 214 score. The 17-year-old who started showing reining horses five years ago was thrilled with her horse and their performance. “We purchased this horse from Franz Lechner two years ago and fell in love with him immediately,” said Karasova who has been riding with Czech trainer Jonáš Bujnoch for the past four years. “I showed him at the Italian Futurity but unfortunately didn’t make the finals. In 2019 we were reserve champions in the Level 1 ARHA Futurity, our first international show, and it’s great to be able to make the finals here. My thanks go to Jonáš for always being so supportive, from the beginning when I didn’t have a clue. Huge thanks to my family who is amazing: My father Tomáš, my mother Iveta, and my sister Thea.” 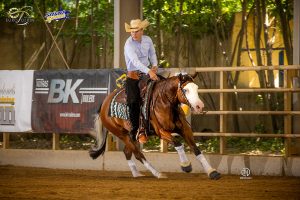 Stiller reined his own Hollywood Gunrunner (NRHA Twelve Million Dollar Sire Gunner x Dun It For Missy), an American Paint Horse mare bred by James Frahm and nominated by NRHA Million Dollar Rider Rudi Kronsteiner, to the same score. “We purchased her when she was six months old,” said Stiller. “She’s always been very nice but has a really strong personality. I rode with [German professional] Jurgen Pouls for two years and after that, even though I ride her myself at home, I train with [NRHA Million Dollar Rider] Ann and [NRHA Two Million Dollar Rider] Bernard Fonck. Last year she was in training with them for a couple of months and since then, at least two weekends a year, I go ride at their place in Belgium.”

As Stiller states, the past two years have been very good for him and his mare. “We were Level 2 reserve champions at the Swiss Derby and last year took the IRHA Level 1 Derby Championship. The NRHA Breeders Derby was the cherry on the cake where we won all four levels in the qualifying go and also rode to the championship in all four levels.”

The Euro Derby Non Pro finals will be held on Friday, July 2. The L4 Non Pro Champion will take home a $12,150 guaranteed paycheck.

Qualifier. Open finalists will make their way to the show arena on Saturday, July 3, vying for the Championship titles as well as a guaranteed $24.300 paycheck for the L4 Open Champion.