Until Francesca Ferrarol and her Wimpy Margarita, owned and nominated by her father Maurizio Ferrarol, rode in the pen with one horse left to go in the Finals, two riders had posted a 214.5 for the lead: Gina Schumacher with Little Joe Rush and Wolfgang Hammer aboard Call Me Lil Josie.

The 18-year-old Italian rider and her stallion by NRHA Twelve Million Dollar Sire Wimpys Little Step out of Custom Margarita (by Custom Crome) had won both the $19,200- added* Level (L)4 and $14,400-added* L3 qualifier. Determined to take the title, the duo came back strong, riding to the Championship and to the $12,150 guaranteed paycheck. “All I can say is ‘thank you Wimpys Margarita,’” said an emotional Ferrarol about her NRHA/Markel Sales Graduate. “I couldn’t be more blessed and, as I said after the go round, he was the coolest horse at our place and I never thought I would ever be able to show him. Thanks to my dad, who believed in us, we managed to win the L3, 2, and 1 Non Pro divisions at the 2019 edition of the NRHA European Derby. We would have won the level 4 division had we entered and now, his performance today made up for that.” Once again Ferrarol thanked her trainer past NRHA Intermediate Open World Champion Guglielmo Fontana who, in turn, had three words to say: “They deserve it!” 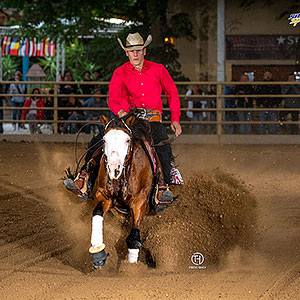 Three riders decided to run off for the $9,600-added* L2 after posting a 213.5: Nikolai Stiller riding his own Hollywood Gunrunner (NRHA Twelve Million Dollar Sire Gunner x Dun It For Missy), a 2012 double-registered AQHA and APHA mare bred by James Frahm, nominated by Rudi Kronsteiner; Markus Spreitzhofer riding his own Cant Hide A Gun (The Big Gun x Cattrena), a 2013 APHA gelding bred by Robert Windisch and nominated by Spreitzhofer; and Jürgen Pritz riding his own Rose of Mercedes (NRHA Million Dollar Sire Cromed Out Mercedes x Smooth Star Freckles), a 2013 AQHA mare nominated by Pritz.

Following the run off, the latter took the win with a run paid back by the judges with a 215.5. “This is simply amazing. Winning this title is unbelievable,” said Pritz who has had his mare since she was a yearling. “She’s 8-year-old now and has always been great to show. The best thing about her is that she is always calm and always perfect!”

Spreitzhofer and Stiller settled for the Reserve Championship after scoring a 213 and 212 respectively and also agreed to tie for the $4,800-added* L1. “We decided to tie for the level 1 and run for the level 2 because it was fair on the horses to do so,” said Stiller who also tied to win the L1 and 2 qualifier with his mount. “This mare who I’ve had since she was a yearling has been so good in the past two years and I am thrilled with these results tonight.”

Spreithofer was also happy with his rides and the Championships. “He’s an 8-year-old gelding who I paid in last year and he was so good,” he said. “He did well in the go round and tonight. He’s so easy to ride and has a huge heart.”

NRHA $112,000-added* Colonels Shining Gun European Derby Open finals will conclude the tenth edition of the Euro Derby on Saturday, July 3. The riders will be vying for the Championship titles as well as a guaranteed $24.300 paycheck for the L4 Open Champion. The 2020 European Derby is open to 6-7-8 and 9-year old horses.