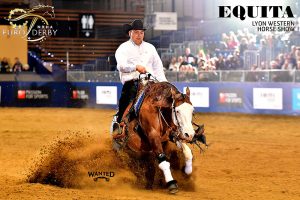 With a 227 score to beat posted by Mirko Midili in the second section, and with only two finalists left to go, Lukasz Czechowicz of Poland rode Frozen Shining Gun, a 2016 American Quarter Horse gelding by Colonels Shining Gun out of Frozen Slide, owned by Katarzyna Roleska, to a great ride paid back by the judges with a 227.5 and the Level L(4) Open Championship presented by LL Tecnologie.

“He hasn’t been very fortunate at the shows,” said an enthused Czechowicz. “We participated in several big shows but something always happened…tonight, everything went according to plans and I am so happy for him; he has always been my best horse. This year we took him to the NRHA Derby in Oklahoma City and he had a really good run in the Finals, but unfortunately, after the last stop, we backed up, so we got a zero score. I really wanted to make up for this so that he could show off what he could do and tonight I am much happier for him than I am for myself.” When asked why the talented gelding was different, Czechowicz added that he is so unlike other horses to train. “I have had the opportunity to ride some great horses, but he is on another level; his mind is very special and it was that way from the day we started him. I am really happy that Lady Luck finally turned to his favor.”

Mirko Midili riding Maytheforcebewhizyou (NRHA Three Million Dollar Sire Spooks Gotta Whiz x Jac Golden Faith) a 2014 stallion AQHA/APHA owned by Alberto Capello closed his run with a 227 settling for reserve honors. “This horse is really cool; the only thing is he was a little bit tired this time around,” said Midili. “I was in Germany for the Breeders Futurity last week and he stayed at home. When I got back, I had to work him a little more than usual so the program was a little different from all the other shows. I am very happy with him, and in my opinion he has yet to perform to the show of his life! I have been riding him for two years now and he just keeps getting better and better.” 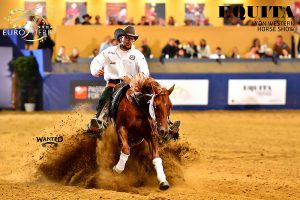 Riding to the L3 and 2 Open Derby Championships with a 222 score was Sebastiano Valtorta of Italy riding Four Season Whiz, a 2013 American Quarter Horse gelding by NRHA Twelve Million Dollar Sire Topsail Whiz out of Dun It Preciously owned by Luca Mauri.

“He’s 8 years old so this was the last special event for him,” said the Italian Professional. “We didn’t make the level 4 finals but he was really fantastic, especially considering that between one special event and the other we never did any schooling runs, only go rounds and finals. At every show, it seems that every time it’s like the first time for him. I am very happy to have managed to win this last one show! Now he deserves a winter of rest and maybe next year we’ll show him in some open classes.” 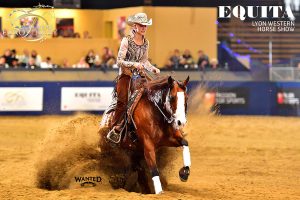 “I’m really happy and so proud of this mare. She is so honest inside the show pen and she just gave me everything. I felt like she was a little bit tired, but she still tried her best, and I enjoyed the ride,” said Maas. “This season was really good for me: I had nice horses to show and they always gave me everything. Pietro Marseglia and the whole Quarter Dream team always stayed behind me. This show was a little different, not having the head trainer Nico Sicuro here as he is in the U.S. I was alone and had to manage everything, so it was even more pressure and I wanted to do well. I had the chance to go late in the draw between all the Level 4 riders, so it was an amazing feeling and I am really happy about it. ‘Barbie’—her nickname since she is so cute— will now have a well-deserved winter break and hopefully next year we can do some more derbies together.”

Following the Finals, NRHA Commissioner Gary Carpenter was pleased with the outcome of the NRHA European Derby so far. “Equita Lyon is an ideal venue for our event: I think it is wonderful for our sport to be exposed to the other disciplines and for them to see what we do at a very high level. It’s all happening here, I love that and I hope that we will be here for many years to come. I also hope that if our European members haven’t been here yet, they will come and see what this is about. There is not much more you can do to improve this event. The spectators are going crazy and the riders are really bringing it on: They are giving it all they have and we are proud to be NRHA, especially here.”

Saturday action started with the ancillary Non Pro classes before the Open Finalists stepped in the arena in the afternoon.

Italian Gerardo Ponzio rode his stallion Big Code, a 2015 American Quarter Horse by Electric Code out of Roosterina, to a 213.5 score to top the $498-added NRHA Limited Non Pro.