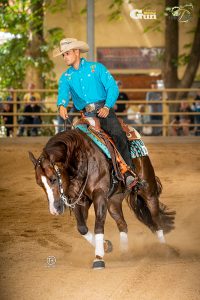 In the first section of the $44,800-added* L4 Open Derby qualifier, Italian Nico Sicuro and Colonels Dancing Gun performed to a 223: Their score held to lead the Level (L)4 Open qualifier securing them a place in the Finals. Until February, the talented 7-year-old stallion sired by NRHA Twelve Million Dollar Sire Gunner out of Dance Little Spook, owned and nominated by Quarter Dream SRL, was in the breeding shed at Frozen Partners in Germany and then made his way to Puglia, Italy, where Sicuro is head trainer for Quarter Dream. “It’s my first ‘serious’ show with him,” said the 25-year-old about his mount who was shown by Franco Bertolani and Andrea Fappani in the U.S., by Gennaro Lendi both in the U.S. and in Europe, and by Markus Gebert in Europe. “I rode him at a regional show to get the feel of how he would be in the arena and I will not hide the fact that I was a little concerned. He proved me wrong! He’s a super cool horse and I must admit that I’ve never ridden a horse like him. He’s so aggressive in the show pen, wants to do well, and I just have a lot of fun riding him.”

On top of the $33,600-added*L3 and $22,400-added*L2 was Gal Grahelj riding Walla Whiz A Dun It (NRHA Three Million Dollar Sire Walla Walla Whiz x The Bun Is Dun), a 6-year-old stallion owned by Katja Zrimsek, bred by Susan Jones and nominated by Grahelj. The pair closed their run with a 219 score. “Today’s a wonderful day: Our stallion did it again!” said Grahelj about his mount purchased as a 2-year-old in the Markel Prospect Sale. “He was with me all the way, was really relaxed, and once again proved how great he is. Not only did we top levels 3 and 2, we also made the level 4 finals.” The Slovenian professional trained the horse and went on to win the 2018 Italian Reining Horse Association L2 and L1 Open Futurity. “Since his Italian Futurity win, he’s become more and more solid and now I can say that I am the one learning from him and not vice-versa.”

Tying to lead the $11,200-added*L1 European Derby Open qualifier with a 215.5 score was Gisela Denk of Austria and Alessandro Roasio of Italy, now based in Hungary, near Budapest, at BL Farm. 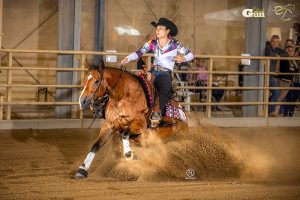 Denk rode Shinedeninger (NRHA Four Million Dollar Sire Gunnatrashya x Shining Whiz), a 7-year-old mare owned by Gernot Kuttner, bred and nominated by Katarzyna Roleska. “My boyfriend [Gerot Kuttner] and I actually purchased this amazing mare for him. They didn’t get on very well together—he only rode her three times— so the reins passed on to me,” shared Denk who has been showing Shinedeninger successfully in European arenas. “She’s been in training with me since and always tries to do her best. Today we had an underscore penalty, but that was totally my fault. I’m really looking forward to the finals now.” 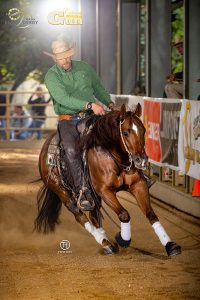 Roasio piloted Il Be Automatic (NRHA Six Million Dollar Sire Magnum Chic Dream x Hickadora), a 6-year-old gelding owned Norbert Juhász, bred by David Pratt and nominated by Quarter Dream SRL. “I’m really happy also because I never thought he would do so well,” said Roasio. “It’s our first show together and he was really honest. The cool thing about this horse is that one of our clients, who was looking for a trail horse, purchased him on the net. They didn’t get on very well together and that’s when we decided to give reining a chance…and chance was on our side!”

Open finalists will make their way to the show arena on Saturday, July 3, vying for the Championship titles as well as a guaranteed $24.300 paycheck for the L4 Open Champion.