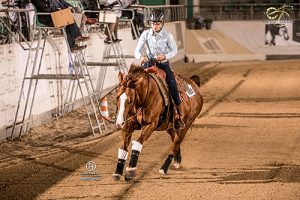 Winning the NRHA Youth 13 & Under with a 205.5 score was Sophia Staub riding Gunslinger Lil Step (NRHA Ten Million Dollar Sire Wimpys Little Step x Playguns Rose) owned her mother, renowned non professional rider and breeder Sabine Schmid. “My horse’s barn name is Bob and my run today was really good —all his maneuvers were good!” said the 13-year-old from Switzerland. “I didn’t have any best maneuver, because everything was really good. My next show is the Swiss Derby in Mooselargue, France, where I will show Bob in the youth classes and I am really looking forward to it.” In second place, with a 201.5, was Lynn Baten riding Kathrin Baten’s Dunit Money Penny (Lil Peppy Dunit Right x Boemil Topitasail). 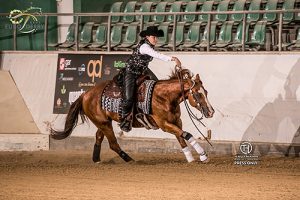 Riding to first place in the NRHA Youth 14-18 aboard her own PM Jackson Olena (Spat Olena x ND Jazzy Step On It), after performing to a 211.5, was Celine Beisel. “My horse’s barn name is Jackson and my run today was very nice,” said the German 18-year-old. “Yesterday I was in the Non Pro Derby Finals and today I just wanted to ride him without pressure and it worked out. Our next stop will be the NRHA Germany Futurity.” In second place with a 208.5 was the duo made up of Lisa Auer and Whizagun (Laredo Whiz X Princess Golden Gun). 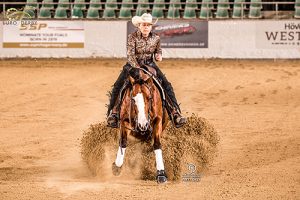 Past NRHA Non Pro World Champion Tina Künstner-Mantl went on to win the €1.500-NRHA Non Pro with a 216.5 aboard Jacpoint QH’s Mizzfire. “My horse is 8-years-old and I’ve had him for about two years,” said the Austrian rider about her mount. “I purchased him through Arno Honstetter and right after that I showed him at the High Roller Reining Classic Non Pro Derby in Las Vegas. Last year I won the Italian Derby and NRHA Germany Breeders Derby on him. Today he was pretty lazy, but after all it’s the last day! I showed him in the Derby here, but he kicked out in the lead change, so we were out of the finals. I entered him today for and he was nice; he can really stop nice, even though he is not the best turner. I now hope to be showing him again this year at the Americana.” With a 214, Anna Lisec tied for second place honors aboard This Wimps So Fly (NRHA Ten Million Dollar Sire Wimpys Little Step x Fly Flashy Jac), owned by Sabine Lisec, along with Florian Koehler riding his own Betta Be Toughenough (Hesa San Jo X HC Whos My Dad).

Following the NRHA ancillary action, the NRHA European Open Derby Finals will close the day and the ninth edition of the prestigious event.

Find news and action from the 2019 NRHA European Derby at nrhaeuropeanderby.com