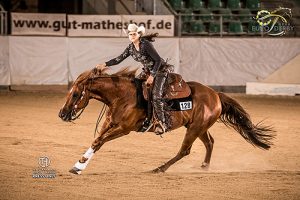 It was all about Israel and Switzerland in the €800-added Intermediate Open and €400-added Limited Open classes with Tal Paz of Israel riding One Shining Dream (NRHA Five Million Dollar Sire Magnum Chic Dream x Shining Sienna) for owner Swiss Larissa Rizzi riding to top honors with a 212. “I showed my horse at the NRHA Germany Breeders Derby but we didn’t make the finals and the same happened here in the Euro Derby Open,” said the Israeli professional. “My run today was way better and managed to fix the bobbles we had in the go round. Our circles were the best maneuvers, where he really looked good, and the spins were also pretty good. In two weeks’ time, I plan to show him in the Swiss Derby in Mooslargue, and after that, we will see, after all he is still young… I would like to thank the owner Larissa [Rizzi] for trusting me with this horse and the whole team behind me back home.” 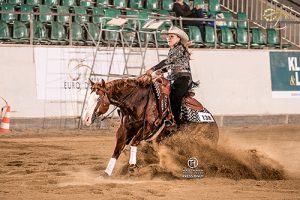 Riding to the winner’s circle in the Intermediate Non Pro with a 211.5 score was Tabitha Sternberg Allen aboard FS Gunner Got Lucky (NRHA Ten Million Dollar Sire Gunner x My Lucky Moonstone) owned by her mother, Francesca Sternberg. “My horse is 8-years old and I’ve had him for the past two years. I bought him in the States, showed him there, and when I started university, we brought him over to England and I’ve shown him in Europe since then,” said the talented young rider from Great Britain. “In the States, I showed him at the NRBC where we made the Level 2 and 1 finals and also in Las Vegas at the High Roller Reining Classic Derby where we won the Limited Non Pro. In Europe, this is our third show in a row now: I showed him at the FEI Young Riders World Reining Championship and made the Individual Finals. We then went to Denmark to show in the NRHA European Affiliate Championship and we just cruised around there. I showed him in the Derby here where we had a really good run, but we had one stop where we crossed the middle line — which was not expected — and so we got a zero which is why I’m in this class. At least we redeemed ourselves! He was really good during my run today, stayed with me the whole way and we didn’t have any bobbles, so I was really happy. What makes me even happier is that he really struggled with his lead changes from small slow to fast circles when we first got him and today he did both of them perfect and that was an achievement. I ride with my dad, Doug Allen and I would like to take this opportunity to thank my parents, my brother [George] for being supportive, and our groom, Jolie, who has been fantastic this week.” Future plans for FS Gunner Got Lucky include a well-deserved rest to get ready for either Equita Lyon or Verona later in the year.

With a 211 score, Nadja Hammer of Austria rode Starlit Spook (NRHA Five Million Dollar Sire Smart Spook x Gay Light Star) owned by her husband Wolfgang Hammer to first place honors in the Limited Non Pro. “My husband and I purchased this horse as a 2-year-old, he’s now 8 and has been with us since we got him,” said Nadja following her win. My husband showed him successfully until last year and then I took over the reins. I feel good about my run today, especially our left circles which were really good for me and probably our best maneuver. I’m not sure about future shows with ‘Starlit,’ since he is out of aged classes, but maybe we will show in some ancillary classes. I am really happy with how things went today and I would like to thank my husband, our trainer Tomas Martinek, and, of course, the whole Hammerhoff team!”