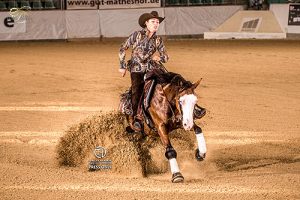 Kreuth, August 3 –  Provided by Simona Diale —In the ninth edition of the National Reining Horse Association (NRHA) European Open Derby Finals, it was the first horse-rider-combination in the second section that held the top score all the way through the end of the 19 finalists. NRHA’s newest Million Dollar Rider Ann Fonck of Belgium rode Diego Dalla Gassa’s Gunners Specialolena (NRHA Two Million Dollar Sire Gunners Special Nite x Dolly Jac Olena) to a 222 score that clinched top honors in the €50.000-added * Level (L)4 Open. “I’m really really happy; it’s my third European Derby L4 Championship! My son, Justin, for the first time, drew for me and picked draw #1, so I told my husband that maybe next time would do it myself. In the end, it looks like it was a good draw! My horse was good, she is a really nice mare, but once again, I didn’t really expect to win, because when I was riding during the training sessions, I saw really great horses and such good riders competing…in the end, it all worked out and I’m really happy.“ The 5-year-old mare was bred and nominated by Luigi Parise and counts over $25,000 NRHA Lifetime Earnings (LTE). 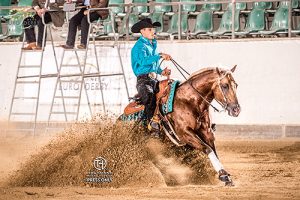 Two NRHA Professional riders from Italy shared the L4 Open Reserve Championship: Nico Sicuro rode the 7-year-old stallion Sugar Little Step (NRHA Ten Million Dollar Sire Wimpys Little Step x Ah Sugar Sugar) owned by Quarter Dream Srl to a 220.5 score, also claiming the €35.000-added* L3 Open Championship. “I started riding him in February this year. He is already known for his great achievements with Gennaro Lendi and Markus Gebert in the saddle,” says the 23-year-old,head trainer for Quarter Dream, a breeding and training facility based in the south of Italy. “Our first show together was the NRHA European Futurity where we won the NRHA Intermediate Open class. I then showed him at the Italian Reining Horse Association (IRHA) Derby where we won the L2 and L3 Open divisions, and placed third in the L4 with a 223 score. At this show, he was nice all week long; I always rode him trying all the maneuvers we had in the finals. Tonight he was super and did everything I asked him and he was always with me.” Sicuro was quick to thank the owner of Quarter Dream, Pietro and Helena Marseglia, as well as the whole team behind him both at home and during the show. Sugar Little Step was bred and nominated by Wolf Dieter Luft and boasts over $59,000 NRHA LTE. 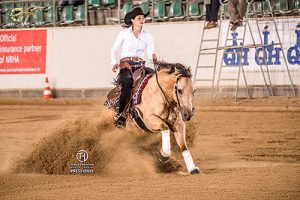 Tying for the €20.000-added* L2 Open Co-Reserve Championship were the €10.000-added* L1 Champions: Clémence Neveux of France and Mona Doerr of Germany who closed their performances with a 219 score. Neveux, riding Thomas Soutric’s 8-year-old gelding Frankiegoestoholywod (NRHA Million Dollar Sire Hollywoodstinseltown x CN Missilenium), exited the arena after her run with a full-house cheering on for her suggesting the highest score of the first section of the finals. “My horse was really good during the whole run tonight. Our circles were really great, the turns could have been better, but I was happy with them,” said an emotional Neveux. “He was a little fast in the rundowns but stopped really great. I want to thank Thomas [Soutric] and also the owners of CM Quarter Horses who have trusted me for more than ten years now with my program.” Frankiegoestoholywod was bred by Angelo Capitelli and nominated by Edoardo Bernardelli. 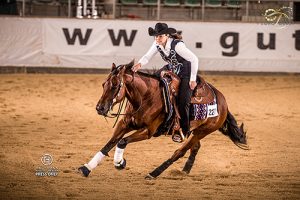 Second to last to enter the pen in the first section of the Open Finals was Doerr with Martin Bachmann’s G Whiz Gus. “I’m really happy because this is my first NRHA European Derby and I won it. My horse is a really lovely gelding with a big heart. He is always listening and tonight he gave me everything,” said the NRHA Professional of Germany. “I want to thank all the people behind me, and of course a special thank you goes to the owner Martin [Bachmann] and to my trainer Dominik Reminder; he helped me a lot here at the show and at home.” The 5-year-old gelding was bred and nominated by Heike Melanie Ebler.

The week in Kreuth also offered the $5,000-added NRHA European 3-year-old Pre Futurity, the €12.000-added NRHA Mid Summer 4-year-old Futurity as well as a full-slate of NRHA Ancillary classes and was managed by IRHA in collaboration with NRHA Germany. Over 320 horses made their way to the Ostabayernhalle and contributed in the success of the NRHA European owned event.

Find news and action from the 2019 NRHA European Derby at nrhaeuropeanderby.com