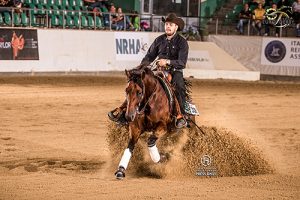 Kreuth, August 2 — Provided by Simona Diale — The 2019 National Reining Horse Association (NRHA) European Derby offered competition for all with 4-year-old horses performing in the NRHA Mid Summer Futurity and 5-, 6-, 7- and 8-year-old horses roding for the €20,000-added* European Level 4 Non Pro Derby. Once the sun went down on the Ostbayernhalle arena, Edoardo Bernardelli of Italy and Wolfgang Hammer of Austria opted to tie for the European Level (L)4 Non Pro Championship and a young Francesca Ferrarol left the arena with three Non Pro Derby Championships to her name. 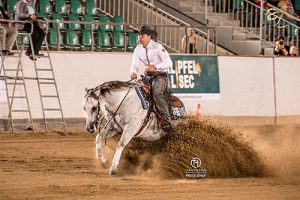 Ferrarol and her father’s [Maurizio Ferrarol] Wimpy Margarita, a 6-year-old stallion by NRHA Ten Million Dollar Sire Wimpys Little Step out of Custom Margarita laid down an impressive NRHA pattern #9 with only two horses left to go in the first section of the Non Pro Finals. The judges paid her back with a 217.5 and her score held until the very last combination putting her firmly in the lead in the levels she had qualified for: the €15.000-added* L3, €9.000-added* L2 and €5.000-added* L1.

The win was, of course, three-times as special for 15-year-old Ferrarol. “I still cannot believe all this is happening,” she said. “I didn’t really feel comfortable with my horse in the go round, plus we made the Level 3 finals through the Consolation. Tonight, before entering the pen, I thought to myself: ‘If I am here, there must be a reason, so I should give my best no matter what the final outcome will be.’ It went really well and I’m extremely happy – this horse has a heart of gold and tonight he knew I was hoping he could give me all he had …and he did!” 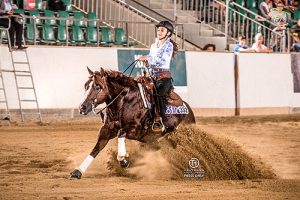 Draw 2 in the second section of the Finals, Wolfgang Hammer and his Mr Ricochet (Ricochet Rooster x Docs Oak Rosy), a 6-year-old stallion bred and nominated by 23 QH Az. Agr. SS, performed to a 217. The duo — leaders of the L2 Non Pro Derby qualifier — set the bar in the L4 division until Edoardo Bernardelli and his Whiz Wild West came back to match their score. The Italian rider and his 6-year-old gelding bred and nominated by Mattia Camisi, already leaders of the L4 and L3 in the qualifier, settled for the L4 Non Pro Derby Co-Championship and also took the L3 Reserve Championship along with Hammer and his mount who also claimed reserve honors in the L2 division. “I’m really happy with the way my horse performed tonight,” said Bernardelli. “Everything I asked for he did well. We missed one stop, but that’s ok; he topped the qualifier and tonight he repeated his performance in the finals. I would like to thank my family, who is always there to support me, and my girlfriend. A big thank you to Andrea Napolitano and Andrea Grazi for helping me before the finals.” Just as thrilled was Hammer: “Sometimes you feel like your run is bad but in reality, it’s good. This time around, he felt super and it was so much fun to show him. He did everything we trained for and everything I know he can do… He was amazing today and I could not be any happier.”

Closing with the L1 Non Pro Derby Reserve Championship, as well as third place in the L3 division, was Marie Guensner and her Hot Spark Olena, a 6-year-old gelding by Shiner Olena out of Roosters Hot Piq, bred and nominated by Katarzyna Roleska.

Saturday, August 3 Action: will include the NRHA Youth 13 & Under, Youth 13-14, €1.500-added Non Pro and the much anticipated European Open Derby Finals starting at 3 p.m. with the first section and at 7 p.m. with the second section.