Kreuth, July 30 — Provided by Simona Diale —All finalists of the ninth edition of the National Reining Horse Association (NRHA) European Derby — open to 5-6-7-8-year-old horses enrolled in the NRHA Nomination Program — were determined following the Open Derby Consolation held on the third day of great reining in Kreuth. 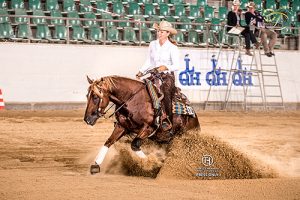 Along with a full-slate of NRHA ancillary classes, this year’s edition of the Euro Derby also offers the €12.000-added NRHA 4-year-old Mid Summer Futurity and the €5.000-added NRHA 3-year-old Pre Futurity. The latter was held following the Open Consolation and, taking the title in the Open Level (L)4 Championship was NRHA’s newest Million Dollar Rider Ann Fonck of Belgium with Lil Trouble Spook owned by Ingrid Vermeiren/Codan NV between the reins. “It’s really special for me to ride this horse and see him do so well here because we own his mama, we bred him and we started him ourselves,” said Fonck about her mount by NRHA Five Million Dollar Sire Smart Spook out of Lil Trouble Miss. “Ingrid [Vermeiren] purchased him at the beginning of this year and I am very grateful to her for trusting our program and leaving him in training with us.” 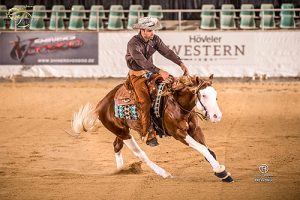 Taking the Pre Futurity L2 Open Championship was French Bastien Bourgeois aboard Colonel Barbee Dream (Colonels Shining Gun x Barbee Top Dream) owned by Manuela Masson. “We purchased this horse as a weanling and he’s been with me since,” said an enthused Bourgois. “He’s always been really nice to train, today was his first time in the show arena and I could not be any more pleased with him — he was easy and thought he was at home!” 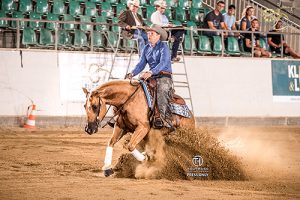 Wolfgang Hammer’s winning streak this year moves on as he went on to claim both the Pre Futurity L4 and L2 Non Pro titles, this time riding his own Baddestchicintown (NRHA Million Dollar Sire Hollywoodstinseltown x Smart Chicody Sue). “I purchased this mare as a yearling from Tanya Jenkins in the U.S. and brought her to our place in Austria immediately after,” said Hammer. “Our trainer Tomas Martinek started and trained her and did a really good job with her…that’s the reason she is easy to ride! We wanted to try her out in the show pen, this is her first time being shown ever and she showed us that she is very talented and very good minded.” 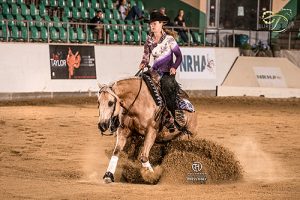