In front of a full house, 47 horse-and-rider combinations made their way to the $84,187-Added 2022 National Reining Horse Association (NRHA) European Derby Non Pro Finals on Friday at Equita Lyon in Lyon, France. No stranger to the Equita Lyon arena, Sára Karasová of the Czech Republic returned this year to hold on to her last year’s title and added on the Level (L)4 Championship. 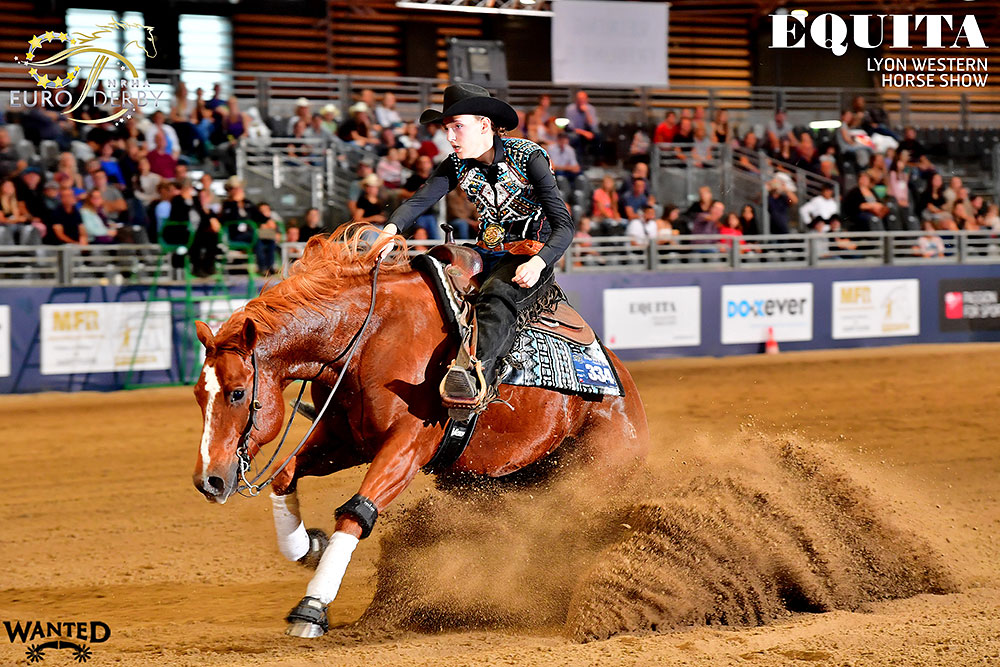 In 2021, Karasová and her 7-year-old gelding nominated by Franz Lechner, KH Yankee Step (NRHA Million Dollar Sire Rowdy Yankee x Step A Little Closer), had claimed the L3, 2, 1 and Youth Non Pro Derby Championships. This year, the young Czech rider tied for the lead in the Youth Non Pro Derby go round and made the L4 and L3 Non Pro Finals. After their thrilling performance in the Finals, the duo was awarded a 223.5 score that held until the very end of Section 2 and brought the pair the 2022 NRHA European Derby Non Pro $35,039-added L4, $24,574-added L3, and Churros European Derby Youth Championships.

“I am so incredibly happy; I didn’t expect this at all,” said the excited Champion who praised her horse for being with her the whole run. “My horse has been awesome the whole week, but during the run today he couldn’t have been any better. I was hoping for a 220 or so, but not this. When they announced the score, it was in French, so I didn’t understand, and then they announced it in English and I couldn’t believe it. He is a seasoned horse, he will be 8 next year, so it will be his last derby year, but today I knew after the first set of circles that he would be good. He truly shows from his heart and after today I feel like nothing can stop us,” said the 19-year-old rider, who showed for the last time in the Youth division at this show and closed her youth career with a run to be remembered.

Next year, Karasová is planning to ride her other horses besides KH Yankee Step. “I have another derby aged mare at home that I plan to show and we also have a few coming 2-year-olds, so there will be plenty to ride, but I will mainly focus on the derbies. I am also planning to go to the U.S. in the winter to intern with a reining trainer for a few weeks, so I am looking forward to that.”

Karasová thanked her parents and her sister Thea, also an NRHA European Derby Non Pro Finalist. “They are my biggest support. Also, special thanks go to our trainer, Jonáš Bujnoch, without whom we would have never been where we are today; he is truly the best.”

The current NRHA European Youth Council Historian was excited about the youth’s results in today’s Finals. “Youth is the future of reining, so it is great to watch the young riders succeed in the top-level competitions. It also shows the great support we get from our parents. At our age, we are not able to afford to show at this level, so I think it’s great to see that reining is a family affair for so many people and the kids have great support from their families.”

Swiss Adrienne Speidel aboard her own 7-year-old stallion nominated by Fabian Strebel, CDC Cromed Resolve (Custom Del Cielo x Kaysolve), tied to win the first go-round and closed with reserve honors in both the L4 and L3 with a 221.5 score. “He is really a show horse and did his best today. He was better than in the go round and did everything I asked him. Maybe I should have been more proactive, but I am so happy with the way he went,” she said about her horse who she had had for the past two years. “Plans are now to give him a well-deserved rest and then show him in all the European derbies again.”

Emanuel Gebert today made history as being the youngest rider to ever win the $16,383-Added L2 and $8,191-Added L1 Non Pro European Derby as well as the Reserve Championship in the Churros Youth Derby. He rode his own 7-year-old gelding Gunnalittlestep (NRHA Seven Million Dollar Sire Gunnatrashya x Gay Jays Little Step), nominated by Ambrosini QH, to a score of 219. “I am really happy to have won the level 2 and 1 European Derby,” said the 9-year-old who in 2021 also made history by being the youngest rider to qualify for the European Non Pro Derby Finals. “I have been riding my horse for the past two years and I have to thank him because he is really good and I love him, and thanks to my mom and my dad for this result.” 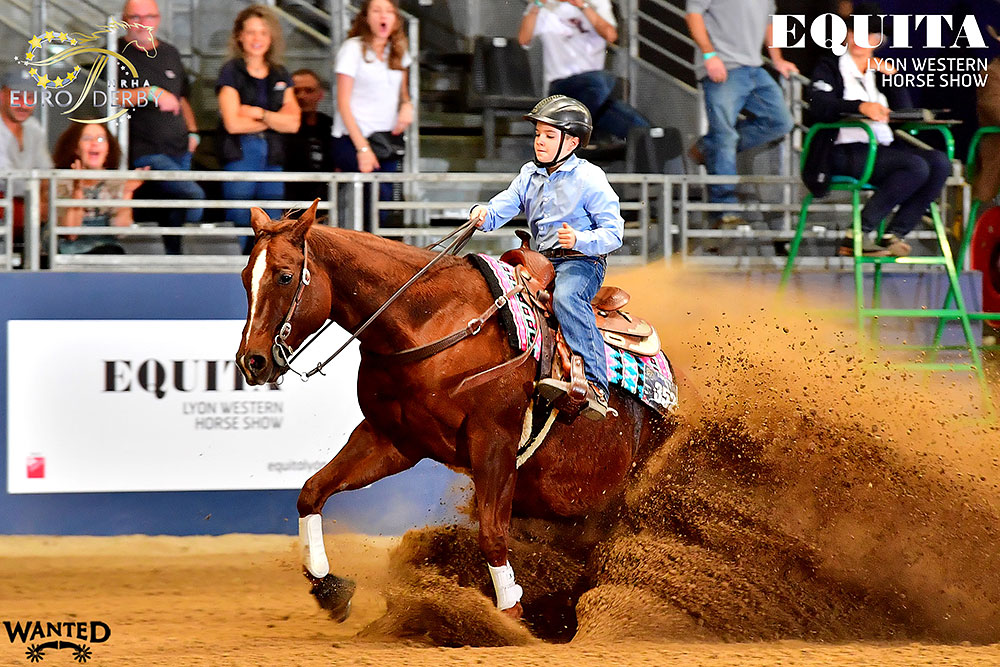 Swiss Nanina Staub and Whizkeywood, a 5-year-old stallion by Whizkey N Diamonds out of Hollywood Footprints, owned by Sabine Schmid and nominated by Humphrey Quarter Horses, closed their run with a 218 to claim the L2 and L1 Reserve Championships. 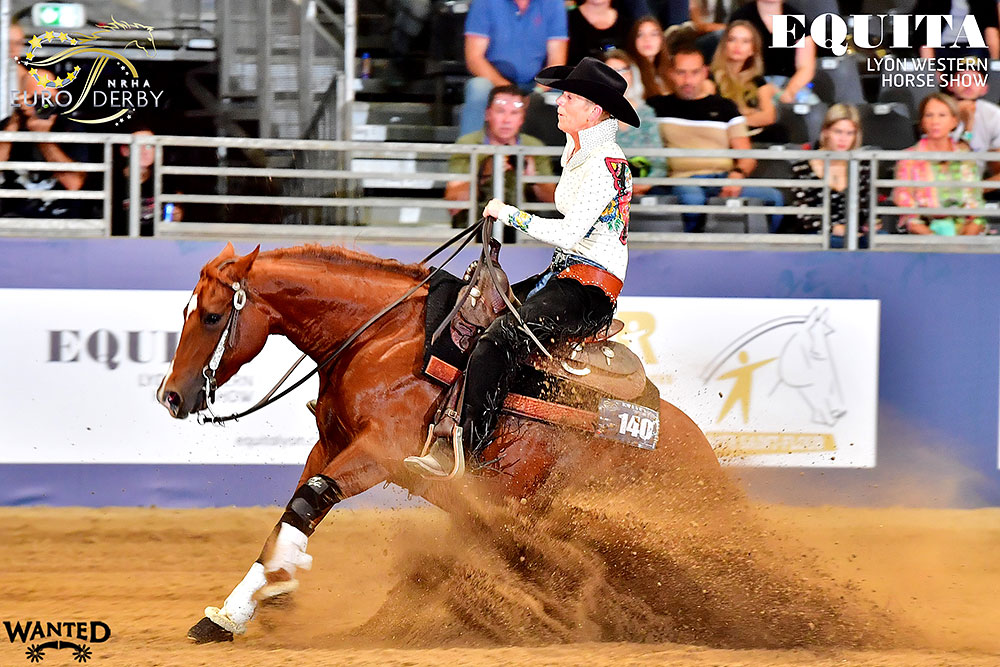 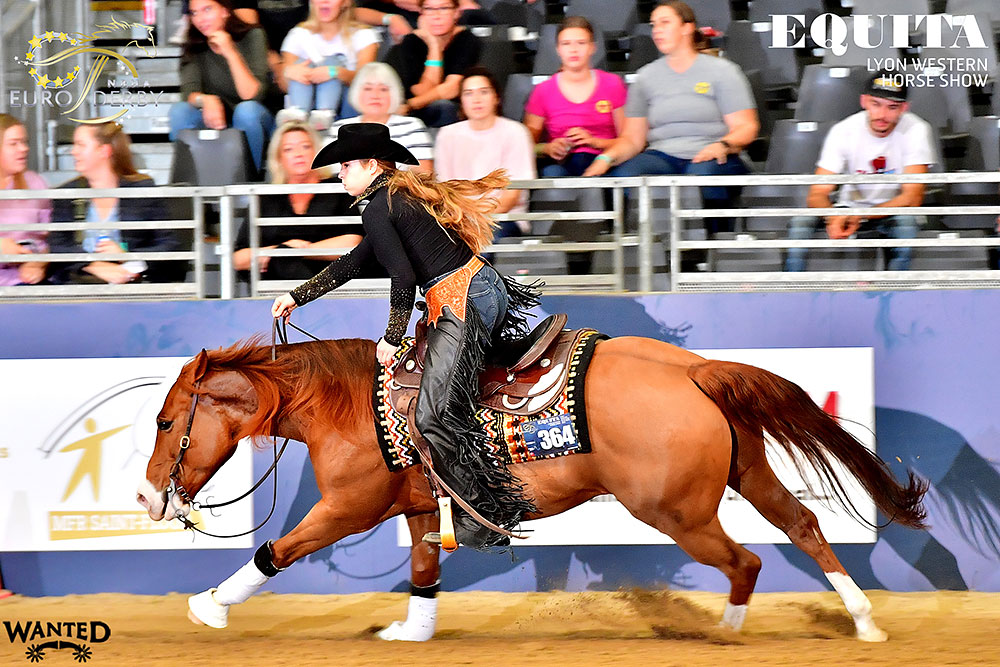 “I am really happy because this is my very first Derby Championship and my horse was very good with me,” said Florian. “He is a really fun horse to show; we had a few bobbles today but he is always there for me. This was a super horse show, the crowd was great, so it was a great way to close the season.” Vermeiren, who tied to lead the L4 Non Pro qualifier, was quick to credit her horse: “We bred this mare and own her dam, which is actually the grand dam of the horse that Ann [Fonck] is showing here [GP A Spook In Town], so that is quite exciting as well. I haven’t shown her much this year, I only schooled her and competed at the BO Ranch Maturity and here; my goal for this season was to do well at these two shows. She has really developed, but I still try to stay safe showing her because I believe she will be even better next year as she needs more time to grow up. Having made the finals gives me huge confidence and I look forward to showing her next year.”

The $1,500 NRHA European Derby L4 Non Pro APHA Chrome Cash Incentive win was for George Sternberg Allen of Great Britain who closed his run with a 215 riding Francesca Sternberg’s A Shining Gun (Shine My Gun x Lady Buena Freckles), AKA ‘Goofy.’ Sternberg purchased the 8-year-old stallion three years ago from [NRHA Professional] Grischa Ludwig. “At that time I went to ride with Grischa. He bred and raised Goofy and after getting on him the first time I realized he was my horse,” said George. “I called my mom, told her, and soon enough the horse was mine. I have always made the L4 finals on him and am thrilled to be here with this result today as my family and myself really love the APHA Chrome Cash Incentive Program.” 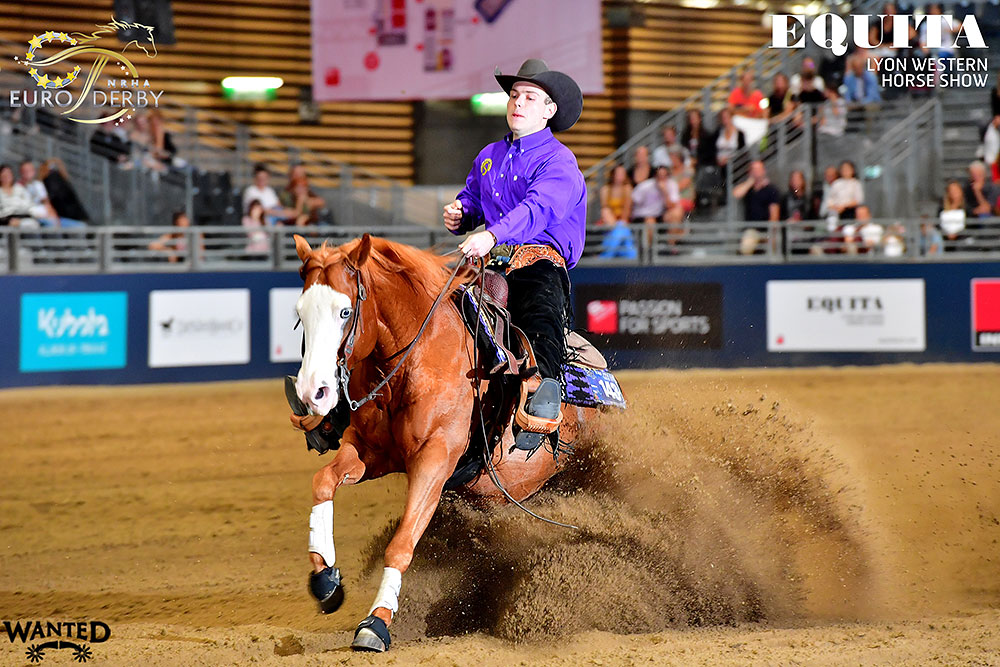 A full-slate of NRHA approved ancillary classes will be offered during the show. Highlighting ancillary action will be the $7,958.37-Added ELEMENTA Non Pro Grand Prix, held on Saturday, 29 October, and the $11,369-Added ELEMENTA Open Grand Prix which will close this year’s edition on Sunday, 30 October.