On Saturday, Equita Lyon hosted the $153,234-Added National Reining Horse Association (NRHA) European Derby Open Finals in Lyon, France. In the evening, 64 Open Finalists met to compete for the Championship titles, 19 of which competed for the most prestigious division: The $61,294-Added Level (L)4 in front of a packed audience. The high level of competition in all the divisions kept the public glued to their seats until the last set of horses where most Champions were determined. 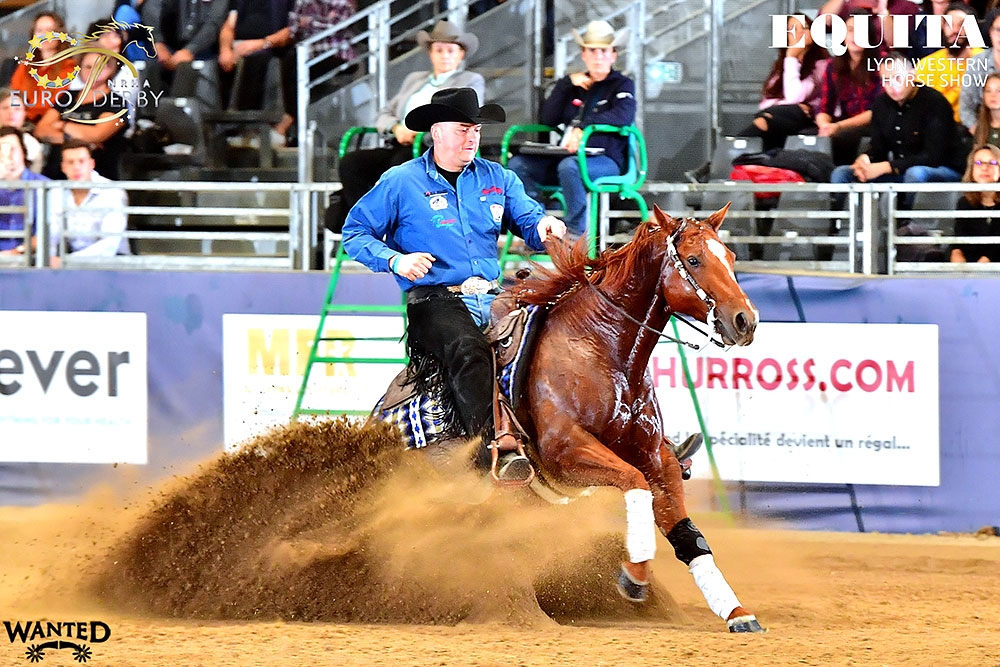 Three horses later, Ludwig stormed into the arena with M Snow Pearl (NRHA Million Dollar Sire SG Frozen Entrerprize x Spooks Pearl), a 5-year-old mare owned by Fabian Strebel and nominated by La Maqueline, between the reins. Determined to give it all they had, the duo repeated Fonck’s score, tying for the Championship.

“I think my wife [NRHA Million Dollar Rider Ann Fonck], who has always ridden this horse, did a super job with him,” said Fonck. “We actually switched horses for this event, I showed him and she showed GP A Spook In Town as I thought he would work better with her after my competing with him for four years. I did a few schooling rides with Shines Like Spook and today was the first time I rode him asking for more and he was really good. When I went in the arena tonight I was really relaxed: I felt good and my horse felt relaxed also. Before going in, my wife told me to trust him, ‘if you speed him up he’s going to be there for you; put your hand down and just go.’ I did exactly that and it worked out.” 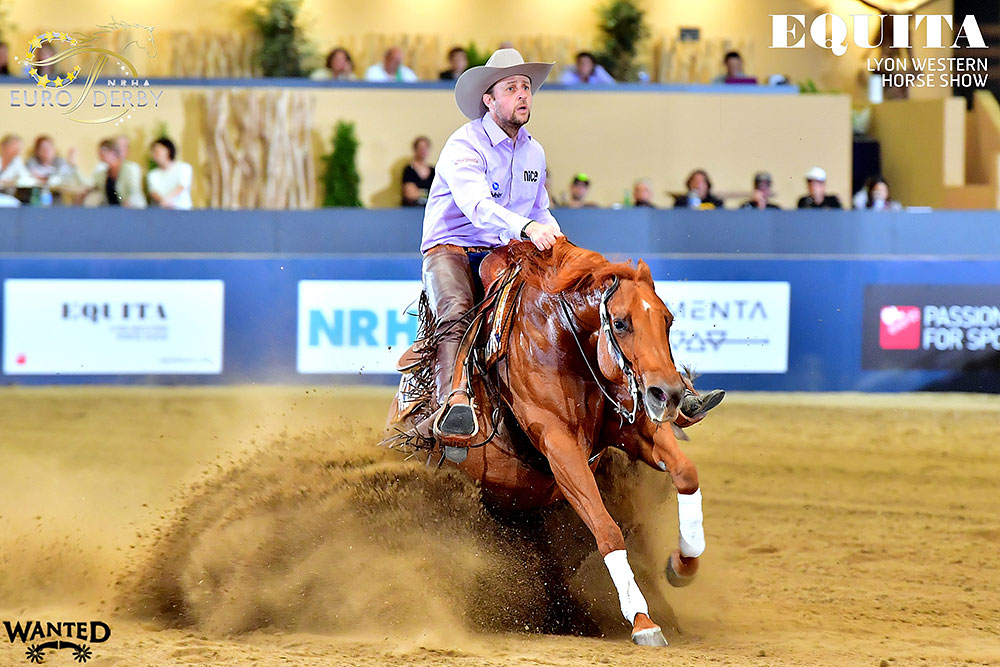 Ludwig was just as happy with his two mounts. “It was one hell of an evening,” he commented. “I felt it was my arena. I knew that I could completely trust my horses and the level of competition was so high that I could not afford to think about how to show. I just put the hammer down, hand on the neck, and went. I wanted to finish my runs with a high score, I knew I had the horses—even though they are two completely different horses—and they were both good in the qualifier. To top it all off, here in France the people are with me even if I am not French. I must say that 2022 has been a great year!”

Ludwig also went on to clinch the $45,970-Added L3 Open Championship aboard the talented mare and also took the Reserve Championship riding Gunnit In Hollywood (NRHA Seven Million Dollar Sire Gunnatrashya x Buffy In Hollywood). The 6-year-old stallion, owned by Alexandra Schmitz and nominated by Giulio Trevisan, performed to a 227.

$30,647-Added Level 2
L2 qualifier leaders Quentin Galliere of France and Tinsel Whizington (Tinsel Jac x Conquistador Sis), a 6-year-old stallion owned and nominated by Sharon De Groot, repeated their success when they topped the division in the Finals, this time scoring a 223. “I feel amazing, my horse did all he could do today. We started him and trained him all the way and last year his owner Sharon [De Groot] showed him and won over $20.000 with him in the non pro classes. This year, she asked me if I wanted to show him and of course, I said yes. We began the season a little rough, he didn’t feel like he was with me the whole time, but at this show, he definitely did. He will have some time off now and I hope I can show him again next year. Today is also special for both of us because this win pushed him over $30.000 in LTE and me over $100.000, so I am truly happy. He is a really sweet horse.” 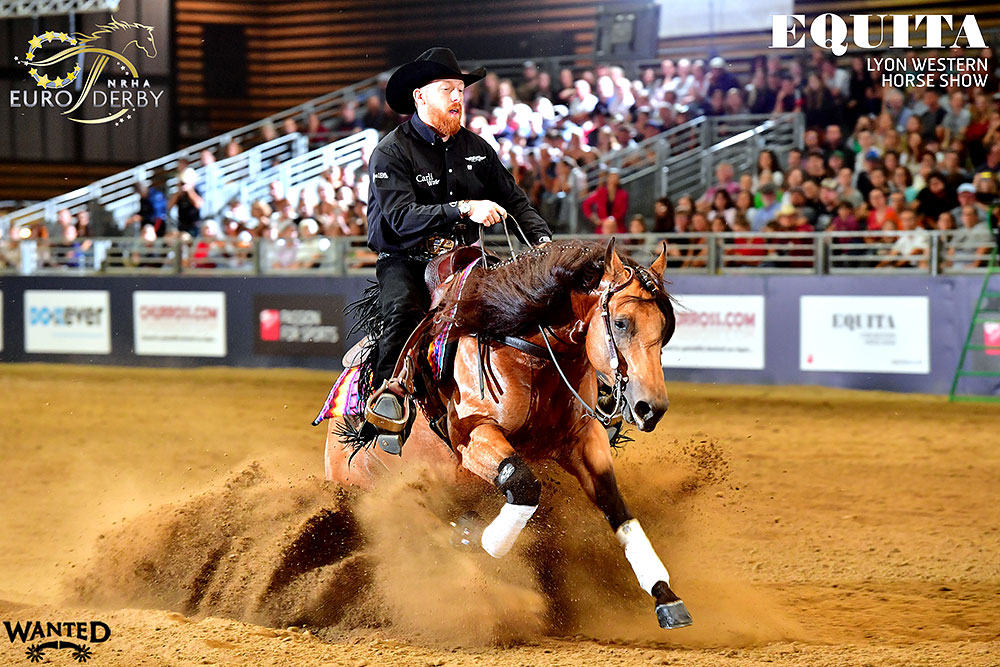 $15,323-Added Level 1
It was a big night for Italy’s Filippo Paris riding Maria Cecilia Fiorucci’s Americasnextcovrgirl (NRHA Four Million Dollar Sire Walla Walla Whiz x Americasnextgunmodel), a 5-year-old royally bred mare, bred and nominated by Arcese Quarter Horses USA. The pair scored a 218.5 which brought them the L1 Open Championship. Showing at a major NRHA event for the first time, Paris was quick to credit his horse for the results, as well as owner Maria Cecilia Fiorucci and the whole Elementa team. “This mare is fantastic. She deserves to be in the L4 Finals and win just that, but for me, this is my first big show, so I am really happy with the results. She helped me in there a lot, so my biggest thanks definitely go to her. I am very thankful to the owner [Maria Cecilia Fiorucci], who trusted me with her horses even though I don’t have very much experience showing. This mare is really special to me, she is like a princess. Sometimes I stay in her stall and talk to her and I know she understands me; she can definitely pull the best out of you. I’ve only been riding her for about a month and a half and I love her, so I hope to be showing her again next year. ” 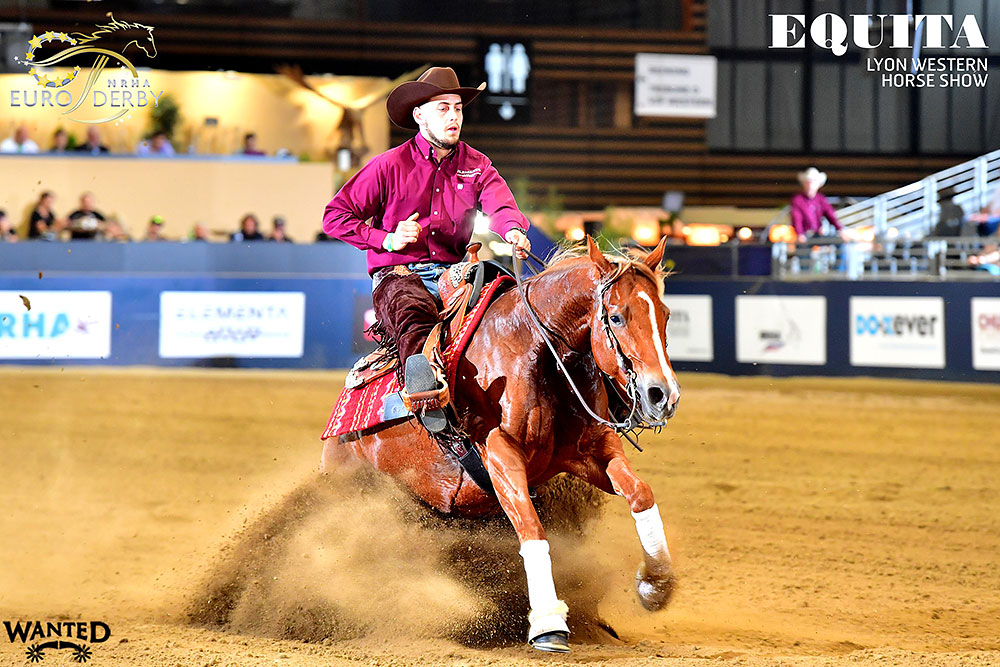 LL Tecnologie European Derby Novice Horse Open
The inaugural Novice Horse Open Derby sponsored by LL Tecnologie is a division for horses that have less than NRHA $5,000 LTE (Lifetime Earnings). Canadian Professional based in Switzerland Morey Fisk and Jayson Henri’s owned and nominated by Gunny Trashy Tucker, a 6-year-old mare by NRHA Seven Million Dollar Sire Gunnatrashya out of Tuckers Starlight, scored a 220 to win the division. “I was really happy with the mare, she did everything I asked her to. I especially liked how she stopped, she is a big stopper. There is no particular plan for her for next year, I think we are going to breed her and then decide if she should show more,” said the Fisk about his horse. “To have the Novice Horse classes here at the Derby is great because it gives the horses another shot to do something at this major event. It was a tough qualifier this year, so this is definitely a nice bonus.” A point behind, Fisk also took reserve honors on Addys Lil Step (NRHA Thirteen Million Dollar Sire Wimpys Little Step x Miss Lil Adytude) owned by Annika Bootsman-Kleberg. 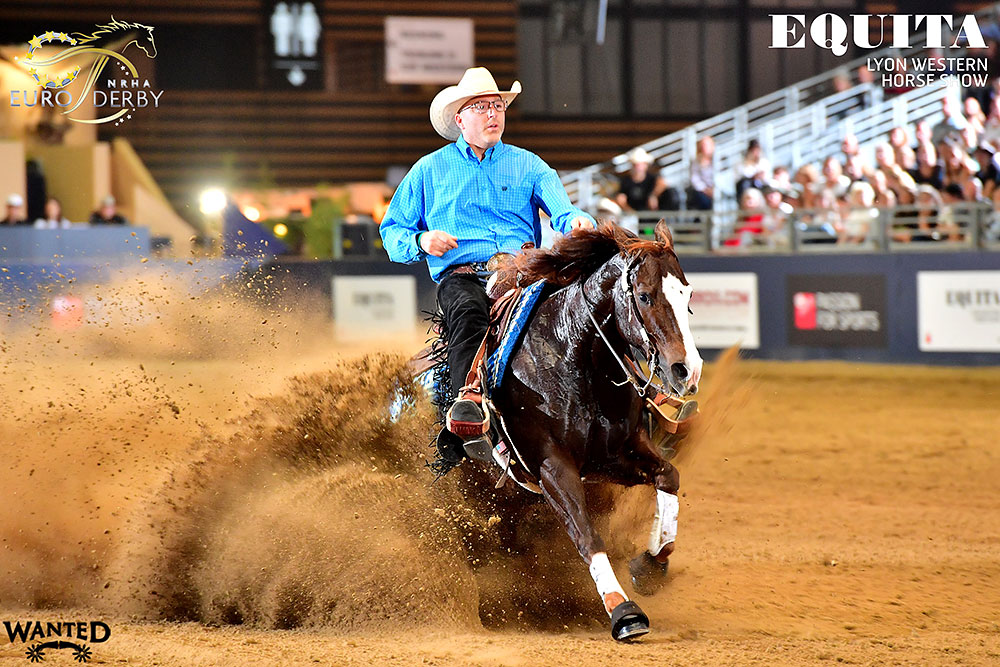 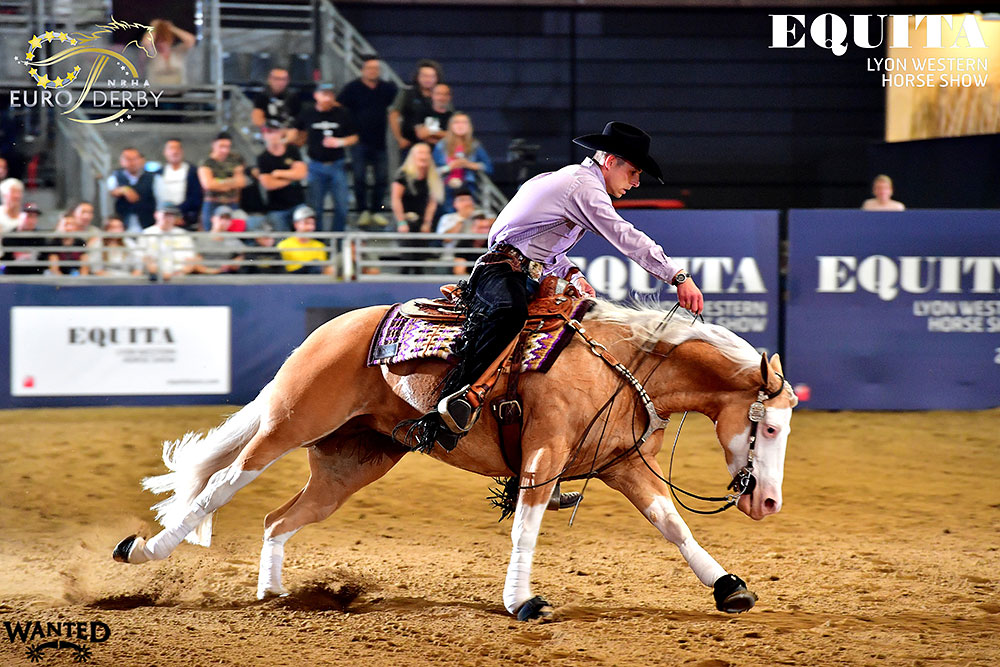 Highlighting ancillary action on Sunday, October 30 will be the $11,369-Added ELEMENTA Open Grand Prix which will close this year’s edition of the NRHA European Derby.