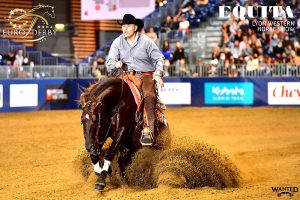 “I really tried to do my best today, and with this horse it is always an indescribable emotion! I bought him as a foal from [NRHA Hall of Fame Inductee] Claudio Risso] and both my family and I are in love with him! He’s an atomic horse, with a big heart … as big as all of Lyon!” said De Iulio. “After a series of unlucky events that accompanied us in the last shows, today everything finally came our way! My biggest thanks go to my trainer, Pierluigi Chiodo. He is truly special to me, both as a person and as a trainer, and without him I wouldn’t be here.” 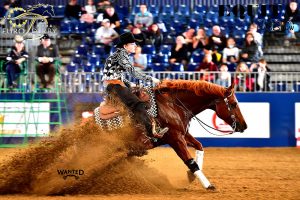 The two riders joined Czech youth rider Sara Karasova who, aboard her 2015 American Quarter Horse gelding KH Yankee Step (Rowdy Yankee x Step A Little Closer), performed earlier in the draw to a score of 215.5 which resulted in a three-way tie for the L3 Championship. After an exciting run off, it was the 18-year-old rider who scored an impressive 219 to take home the Championship.

“This means so much to me, because in the Czech Republic it is little hard, we don’t have very many trainers there, but our trainer, Jonas [Bujnoch], is amazing and he has done so much for us. I have always wanted to win a European event and we didn’t make it to the NRHA European Futurity because I had only had the horse for a short time then. I won the go round at the 2020 NRHA European Derby earlier this year, but then we made some mistakes in the Finals and had a zero score. So, I was very excited to come here and it worked out.,” said NRHA European Youth Historian Karasova. “In the run off I did not expect to get a 219, so I am really happy. I have gotten this score before at our local shows, but it is much more special to receive it at big European show. I was so excited for the result that in that moment I did not if we were first, second, or third; it just meant so much to me that we made it and my horse was with me for all three runs here. I’ve had the gelding for about three years now. He can be little shy, so I don’t think we can ever sell him, because he wouldn’t trust anyone else, he is so spoiled but so special! At home, he can sometimes have a bad day like all the horses, and at shows the important thing is to stay calm and keep everything same, which can get little challenging for me because I am naturally a stressed person and get really nervous at shows yet, he always stays the same with any kind of pressure. Now he really deserves some rest and next year I hope to be back for the NRHA European Derby and Italian Derby. We want to focus more on the shows abroad, because this year we also competed for the NRHA Czech Championship, so next year we want to show more internationally. I would like to thank everyone, who helped me get here: my family–my dad, who also comes to the shows and supports us—and my mom, who stays home to take care of things for us, and everyone who helped us along the way.”

The young rider also claimed the L2 and 1 Championships with her original score of 215.5, as well as the Youth Non Pro Derby Championship. Thea Karasova, Sara’s sister, rode her 2016 American Quarter Horse gelding Playin For Big Guns (Tinseltownsmokingun x Playin For Big Chex) to a score of 213 to take the Reserve honors in the Youth Non Pro Derby. 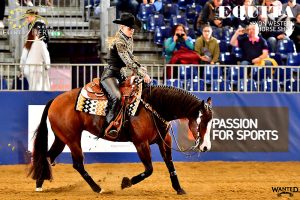 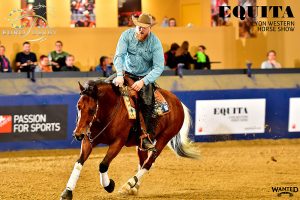 “I would like to congratulate the co-champion [Markus Spreitzhofer] and also thank the [APHA & Jinetes Del Cielo] for starting the [Chrome Cash] Incentive, because it is a nice chance for Paint horses, who have always been a little less valued,” said Blessing. “I registered my horse at the Euro Futurity this year, where I was approached by the representatives and presented this opportunity which I gladly took. There is more money in the program to earn, nice buckles and awards, so it is a great benefit.”

The successful 2021 edition of the Euro Derby came to a close today with an ‘au revoir’ to Equita Lyon 2022!