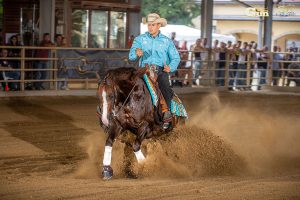 The talented 7-year-old stallion sired by NRHA Twelve Million Dollar Sire Gunner out of Dance Little Spook, owned and nominated by Quarter Dream SRL, was in the breeding shed at Frozen Partners in Germany and then made his way to Puglia, Italy, where Sicuro is head trainer for Quarter Dream. As the Italian professional had mentioned following his top score in the qualifier, the Euro Derby was the first ‘real’ show together. “I am thrilled and won’t hide the fact that waiting for 20 horses to go after me was not easy,” said a smiling Sicuro. “There were quite a few strong horses and riders after us and there were a couple of maneuvers today that weren’t perfect and our score wasn’t that high. He’s a great horse and was great today, I guess I didn’t communicate too well with him and once again he proved how special he is!” 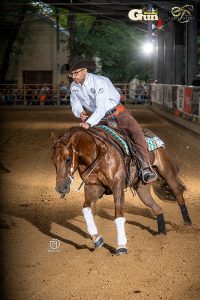 The $33,800-added L3 and $22,533-added L2 Open Derby Championships were all about Italian Sebastiano Valtorta riding Four Season Whiz (NRHA Twelve Million Dollar Sire Topsail Whiz x Dun It Preciously), a 2013 AQHA gelding bred and nominated by Luga Quarter Horses and owned by Luca Mauri. “Everything went according to plans even though I didn’t trust him enough in the stops and I should have!” said Valtorta. “This is truly a once-in-a-lifetime horse. He’s eight years old now, I’ve had him for the past four years and every time I’ve shown him, we placed. He’s made the difference in my career and I can’t thank him and his owner enough for all that they’ve given me.”

The $11,267-added L1 Championship went to Lars Suechting riding JF What A Ruf Juice (Ruf Dun It x What A Juicy Chic), a 9-year-old stallion owned by Markus Suechting, bred and nominated by Frank Huchzermeier. “I would describe my ride as being very solid, not over paced and my horse gave me exactly what was needed for this show,” said the German professional. “I started him as a 2-year-old, have had him in training ever since, and he’s been good-minded and honest all the way. Every single year I earned a title with him.”

Suechting shared that a fundamental part of his and his brother’s [Markus] training program is that they try to keep their horses as fresh-minded and as well trained as they can so as to get solid scores.

Once the curtain fell on the 2020 NRHA Euro Derby, organizer Otto Ziefreund was pleased with the outcome. “The 2020 event was supposed to be held in the renowned fairgrounds in Wels, Austria. Due to the pandemic, the show was postponed to 2021 and at the very last minute was canceled,” he said. “We were very fortunate to have Helmut and Dennis Schulz offer their facility as host, and I would personally like to thank them. I never lost faith in the fact that this event could successfully be held this year; the numbers and the support of all our sponsors speak for themselves and a big thank you goes to all. I truly hope that our bid to host the 2022 NRHA European Futurity in Wels will be accepted.”